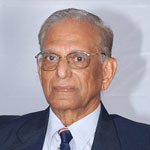 Prof. Kakarla Subba Rao, Past Chairman (2010 – 2020), KIMS Foundation and Research Centre (KFRC), Secunderabad. He breathed his last on 16th April 2021 at the age of 96, leaving behind a legacy of large number of dedicated students and professionals who were taught and inspired by him.

Prof. Kakarla Subbarao, MS., D.Sc. (HON), FRCR, FACR, FICP, FSASMA, FCCP, FICR, FCGP, was an Indian radiologist who served as the first director of Nizam’s Institute of Medical Sciences, Hyderabad. Prof. Rao had PG education in USA and obtained M.S (Radiology) from New York University. He worked as a ‘Special PICKER RESEARCH Fellow’ in Radiology at New York and Baltimore from 1954 to 1956. He was the Chairman of International Educational Academy, Hyderabad. He was also involved in teaching as a guest lecturer in many hospitals throughout the United States and Canada. He was well known for winning multiple awards at the RSNA (Radiological Society of North America) as a fellow of the American College of Radiology. He returned to India from the US in 1986 and joined Nizam’s Institute of Medical Sciences, popularly known as NIMS, which would have never attained prestigious status without Prof. Rao, a world renowned radiologist.

He was an advisor to the government of Andhra Pradesh for Health and Family Welfare and also Advisor for health to the Govt. of Maritius. He was the Chairman of Medwin Hospitals, Hyderabad and Sri Venkateswara Inst of Medical Sciences, Tirupathi. He was President of Indian Radiological Society and Imaging and Chairman of Indian College of Radiology and Imaging.

Prof. Kakarla Subbarao published several papers and books on radiology, edited different journals and delivered many lectures. Prof. Rao has presented many papers at medical conferences, workshops and scientific seminars in India and abroad, winning umpteen number of awards and accolades in a career spanning over five decades. The Indian Radiological and Imaging Association has conferred on him the prestigious ‘Radiologist of the Millennium’ award in the year 2000, in recognition of his contributions to the field of Radiology. The Government of India honoured Prof. Rao with Padma Shri on 26 January 2000, in recognition of his valuable contributions in the field of medicine and his perpetual service to mankind.

Life Time Achievement Awards were given by IRIA AP state, Indo global health summit, Hi9 Web Channel and Andhra Pradesh Academy of Sciences. He was a visiting professor and presented webinar lectures to radiology students of Beizing University. He was a member of court of Governers of Administrative staff college of India.